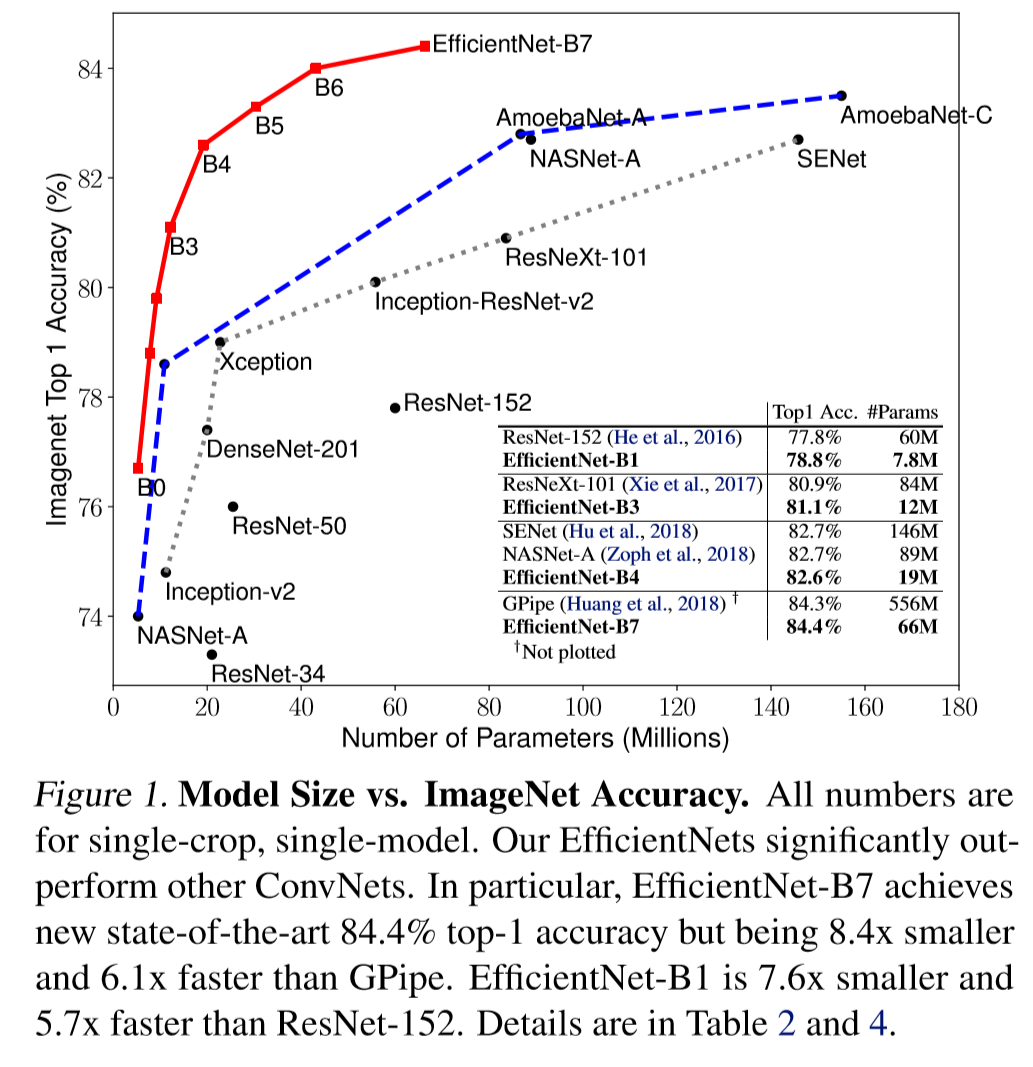 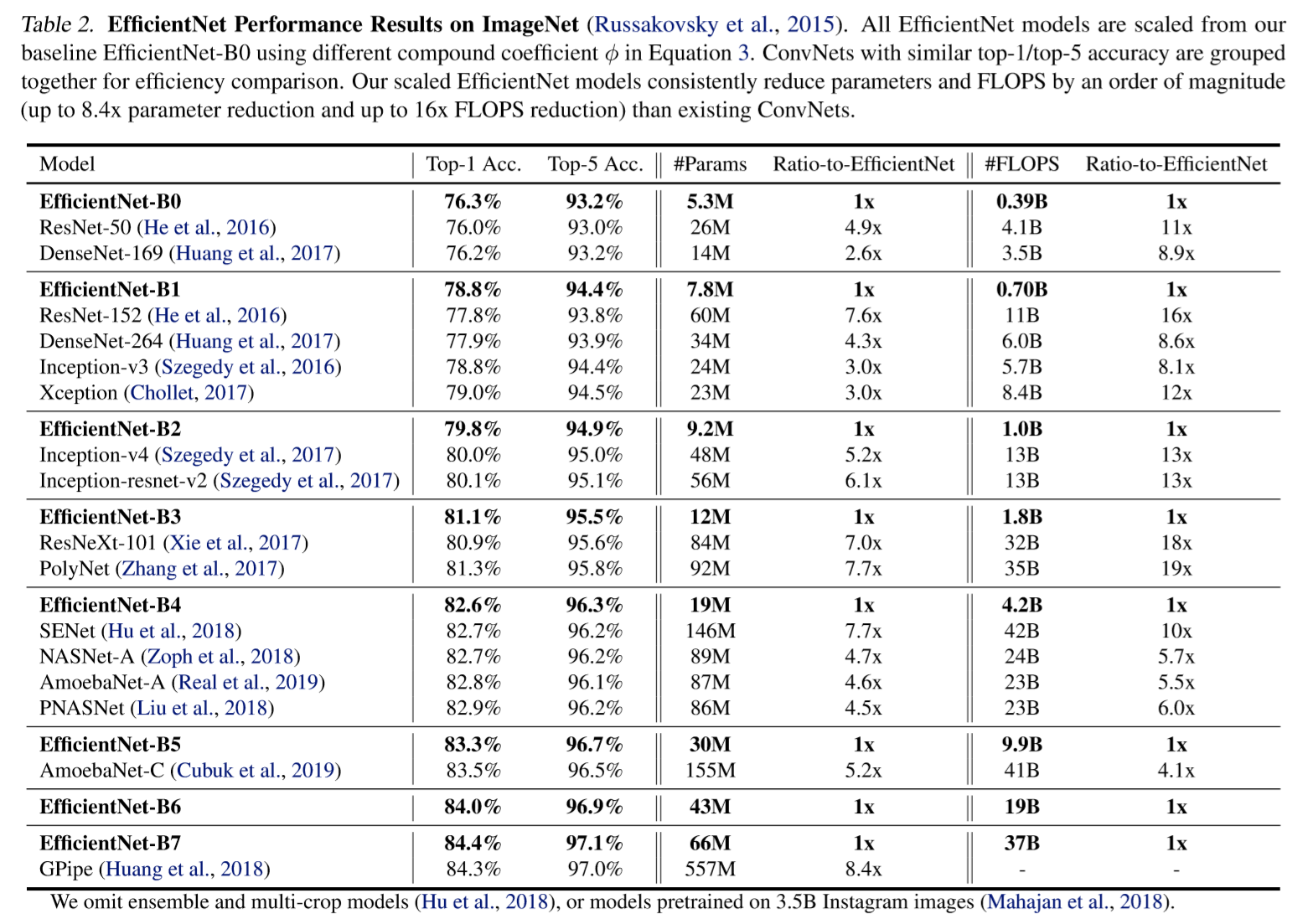 Now I will go through two prerequisites, ‘neural architecture search’ and ‘mobilenet-v2’ briefly.

NAS is an algorithm that finds optimal network architecture. It assumes that the neural net is composed of certain blocks. (ex. 1x7 then 7x1 convolution, 3x3 average pooling, etc) A RNN controller outputs the blocks to build a neural network, then based on it’s validation score on a dataset, the controller is reinforced.

Advanced algorithms such as Progressive NAS and Efficient NAS were invented to significantly reduce search runtime.

Below is an example of cells proposed by NAS. 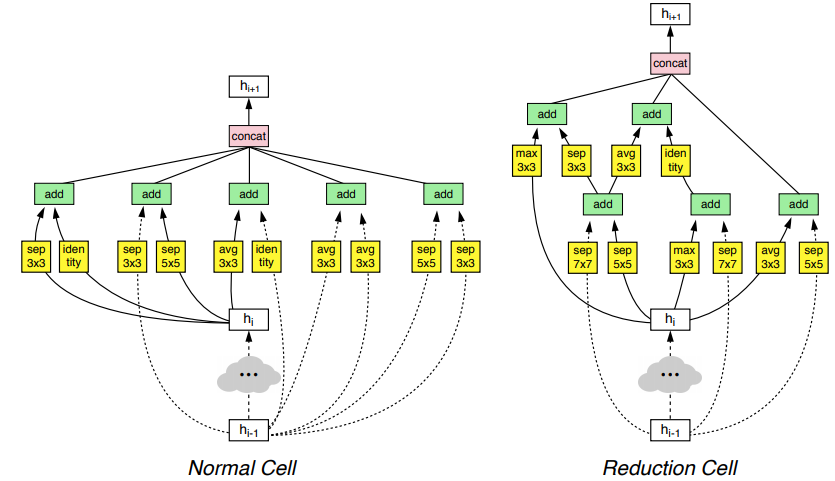 More info about MobileNet v2 here. MobileNet V2 is composed of many MBConv blocks. The blocks have 3 features.

Below is a keras pseudo code for MBConv block.

There has been consistent development in ConvNet accuracy since AlexNet(2012), but because of hardware limits, ‘efficiency’ started to gather interest.

Movile-size ConvNets such as SqueezeNets, MobileNets, and ShuffleNets were invented and Neural Architecture Search was widely used. To find out an efficient model structure, one can first search it with a small model, then scale the found architecture to get a bigger model. Typical example is ResNets.

This ‘scaling’ of ConvNets were done on 3 aspects; ‘depth’, ‘width’, and ‘image size’. Conventionally, scaling was done on one of these aspects, but in EfficientNet three components are scaled simultaneously.

Intuitively, when image resolution is increased, the model should need more layers and more filters to extract features from the increased pixels(information). So it seems efficient to scale 3 components at the same time.

Below is an image describing 3 aspects of scaling, and compound scaling which scales 3 components simultaneously.

The authors observed that it is more effective to scale width, depth, and resolution at the same time, than to scale them separately. 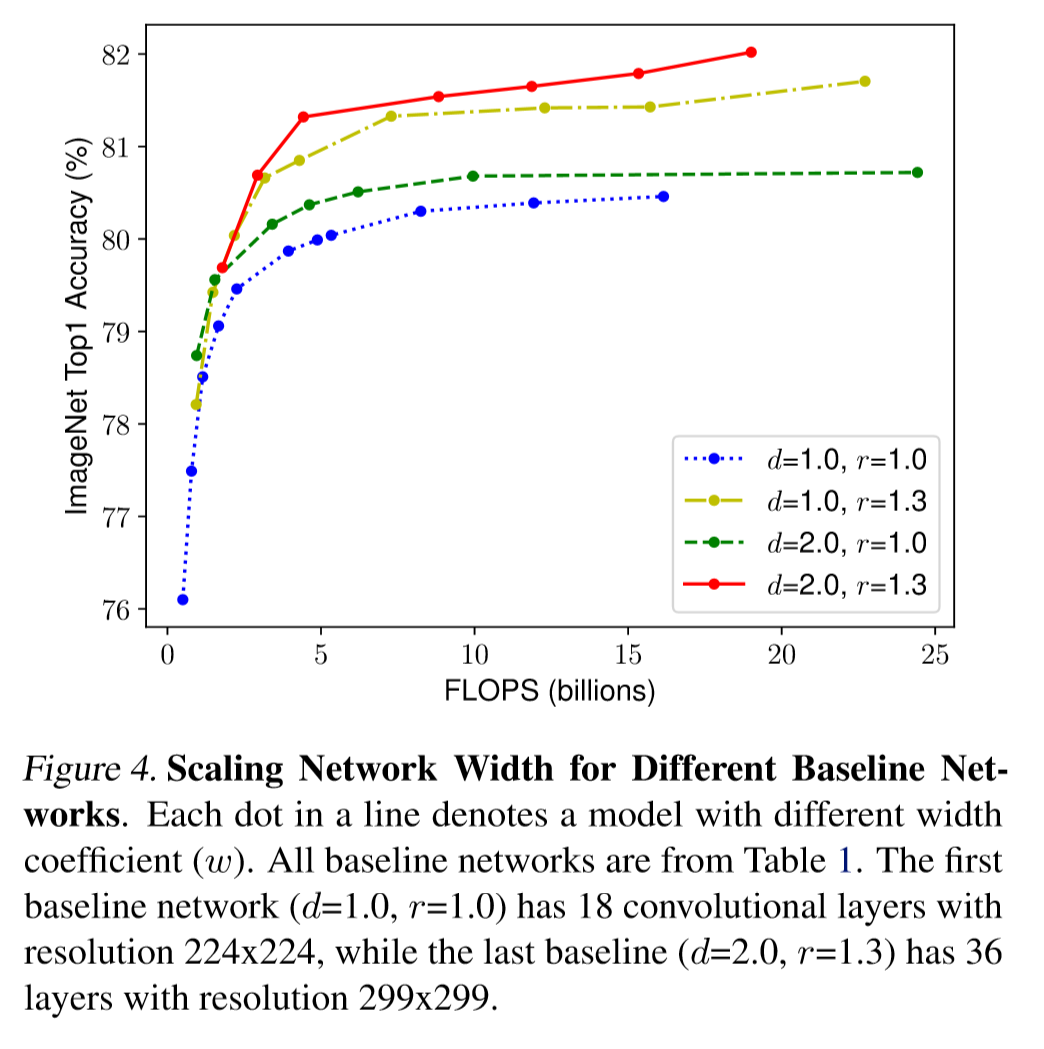 The technique is called ‘compound scaling’. 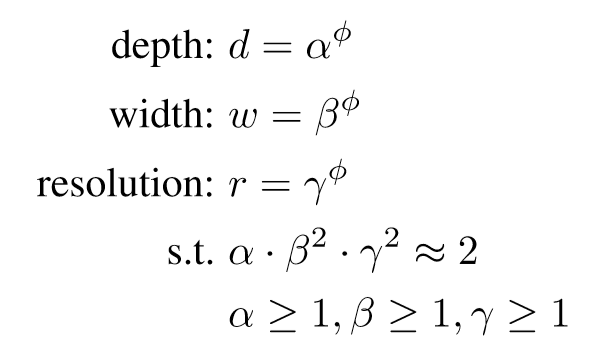 where $\phi$ is the suffix,(eg. 2 from EfficientNetB2) and $d,w,r$ is a factor that is multiplied to the base model’s depth, width and resolution respectively.

Below is a EfficientNetB0 baseline network. 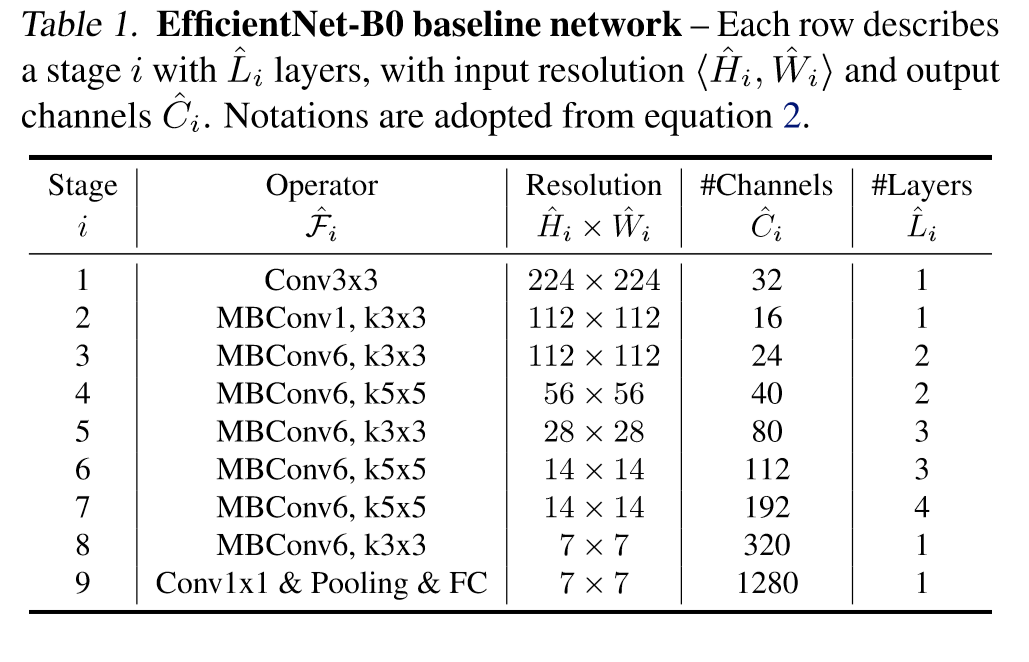 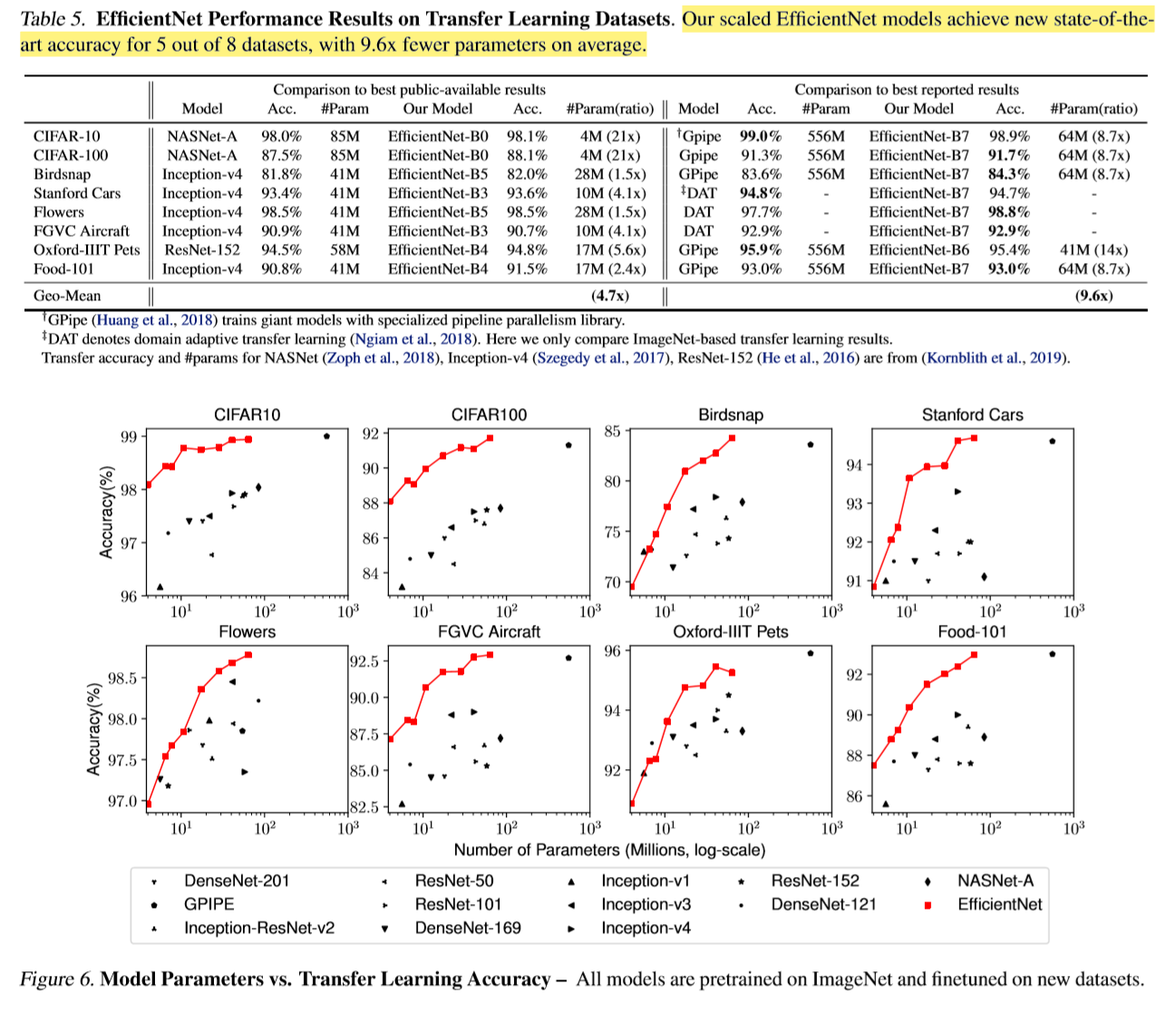