I would recommend you to read the amazing illustrated transformer article to understand this paper, rather than my post.

However sequential nature of these recurrent models inherently precludes parallelization within training examples, which becomes critical at longer sequence lengths, as memory constraints limit batching across examples. Also, they have difficulty catching dependencies between distant positions.

Approaches that used convolutional neural networks as basic building block were able to reduce sequential computation, but were still having difficulties with learning dependencies between distant positions.

Attention mechanisms, especially self-attention which relates different positions of a single sequence, allowed modeling of dependencies without regard to their distance in the input or output sequences, but were used in conjunction with a recurrent network.

The authors propose the Transformer, a model architecture which relies entirely on an attention mechanism to draw global dependencies between input and output. It allows for significantly more parallelization and can reach a new state of the art in translation quality.

Below is a table comparing different models’ compute complexity and maximum path length between two positions. 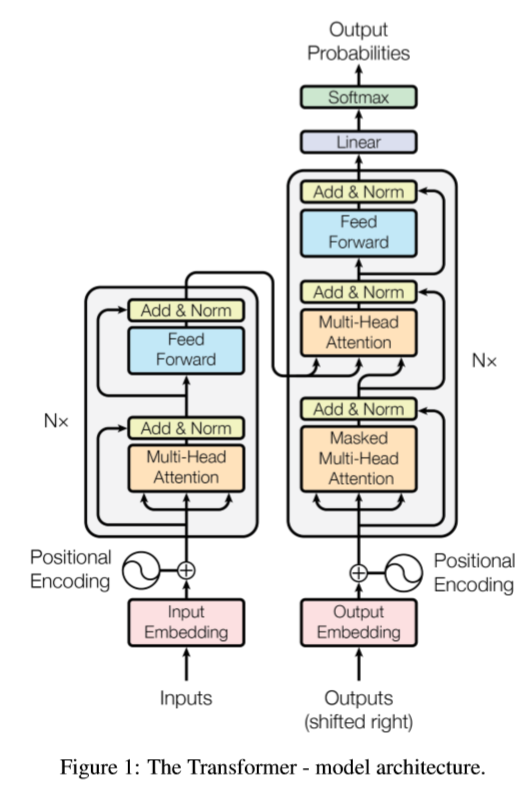 The encoder and the decoder have identical structure except that decoder has one more attention layer that uses output of the encoder.

Both are composed of a stack of 6 identical layers. Each layer has two sub-layers. The first is a multi-head self attention mechanism, and the second is a simple, position-wise fully connected feed-forward network. The authors employ a residual connection and layer normalization; $LayerNorm(x+Sublayer(x))$ . To facilitate these residual connections, all sub-layers in the model produce outputs of dimension $d_{model}=512$. 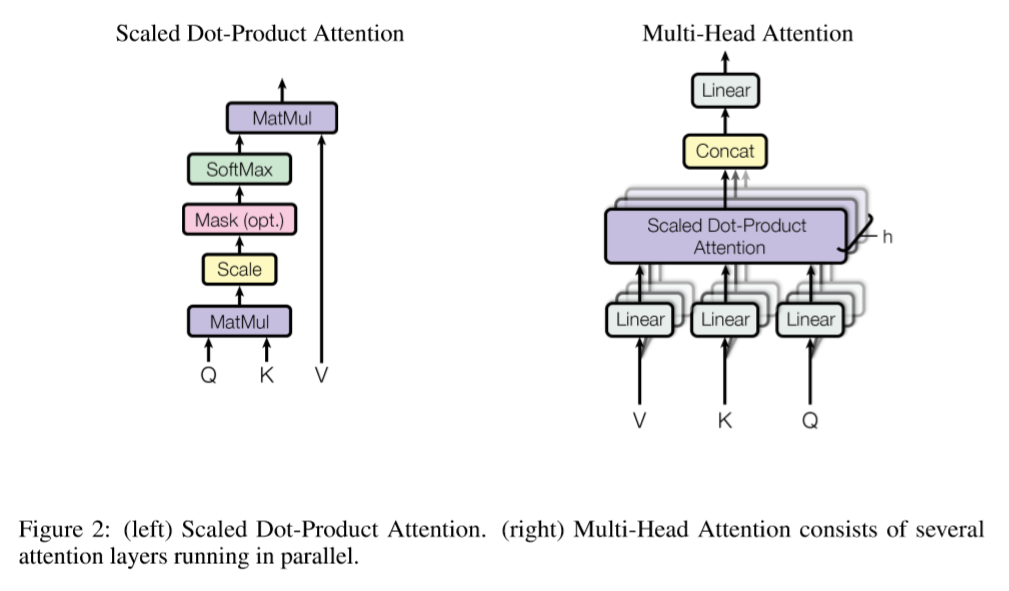 Self attention computes how a word is related to another word in a sequence. First we create 3 concepts; Q(Query), K(Key), and V(Value) by dotting input with corresponding weight matrices.

Let’s say we are processing sentence ‘I am a boy’. Think there are boxes labeled with each word. So there will be ‘I’ box, ‘am’ box, ‘a’ box and a ‘boy’ box. In each boxes, there is a document. You also have cards labeled with each word. When you are processing the word ‘am’, think that you are holding the card ‘am’ and matching it with the box labels. If it matches well, you examine the document inside thoroughly, if it does not, you just quickly see what’s inside.

Let’s think of card as a ‘Query’, box as a ‘Key’, and document inside as a ‘Value’. In self attention mechanism, these query, key, value are all vectors, and you apply a ‘compatibility function’ to calculate a scalar that represents how two match well. Then you multiply it with a value to compute the effect of a key word to a query word.

To summarize, attention is a mechanism that maps a query and a set of key-value pairs to an output. The output is computed as a weighted sum of the values, where the weight assigned to each value is computed by compatibility function of the query with the corresponding key.

In Transformer, dot-product attention is performed as the below formula.

The authors divided the term with $\sqrt{d_k}$ because they suspected that for large values of $d_k$, the dot products grow large in magnitude, pushing the softmax function into regions where it has extremely small gradients.

The authors found it beneficial to linearly project the queries, keys and values $h$ times with different, learned linear projections to $d_k, d_k, d_v$ dimensions respectively. On each of these projected versions of queries, keys and values, we then perform the attention function in parallel, yielding $h$ different $d_v$-dimensional output values. These are concatenated and once again projected, resulting in the final values.

6. Applications of Attention in Transformer

The queries come from the previous decoder layer, and the memory keys and values come from the output of the encoder. This allows every position in the decoder to attend over all positions in the input sequence.

Each position in the decoder attend to all positions in the decoder up to and including that position. We need to prevent leftward information flow in the decoder to preserve auto-regressive property. The authors implemented this by masking out (setting to -inf) all values in the input of the softmax which correspond to illegal connections.

Each of the layers in encoder and decoder contains a layer with two linear transformations with a ReLU activation in between.

While the linear transformations are the same across different positions, they use different parameters from layer to layer.

Transformer uses learned embeddings to convert the encoder input tokens and decoder input tokens to vectors of dimension $d_{model}$. The same weight matrix is shared along the two embedding layers and the pre-softmax linear transformation.

In order for the model to make use of the order of the sequence, the authors added ‘positional encodings’ to the input embeddings at the bottom of the encoder and decoder stacks. There are many choices of positional encodings, learned and fixed. In Transformer, sinusoidal functions of different frequencies were used, since it produced nearly identical results as the learned version but may allow the model to extrapolate to sequence lengths longer than the ones encountered during training.

It would allow the model to easily learn to attend by relative positions, since for any fixed offset $k$, $PE_{pos+k}$ can be represented as a linear function of $PE_{pos}$.

Below is a heatmap that describes positional encoding. 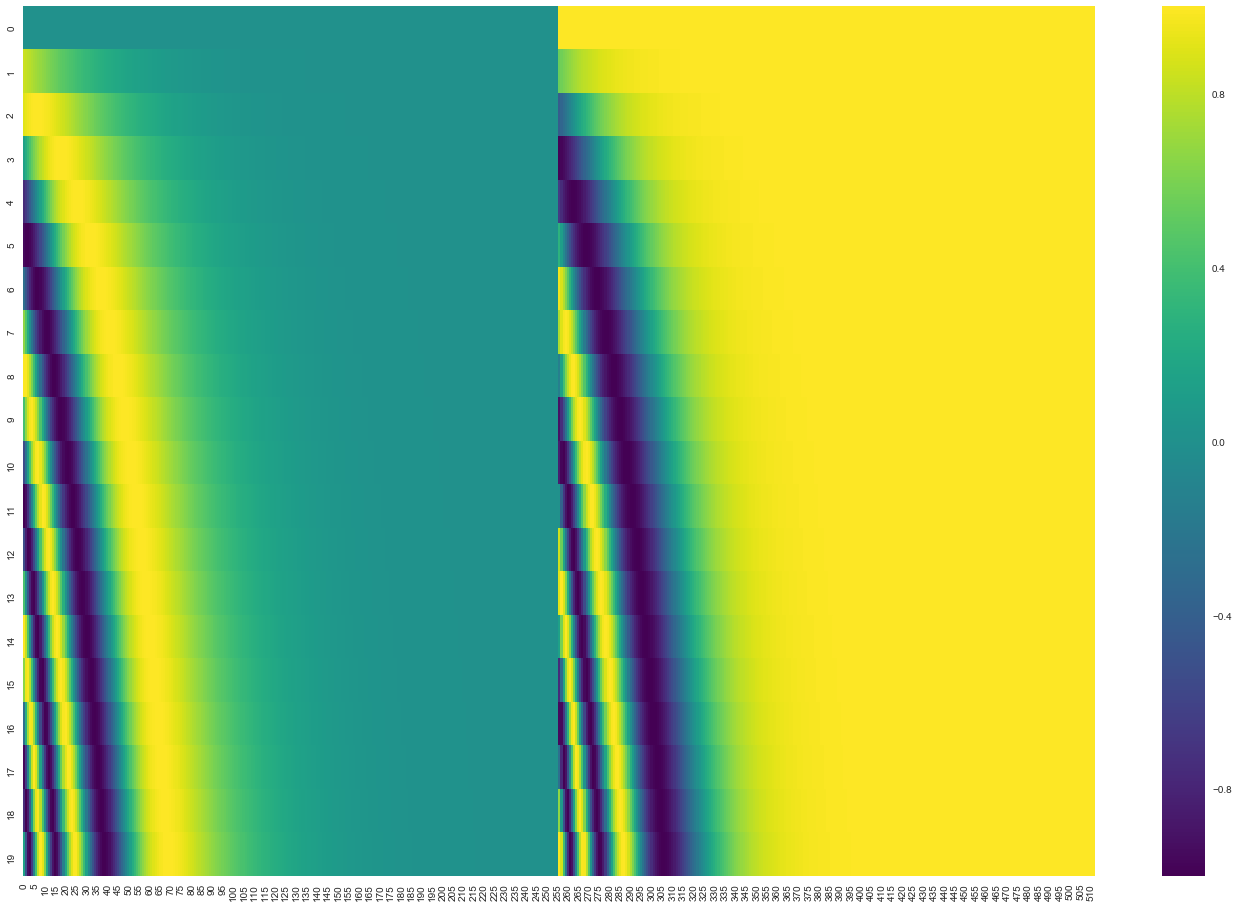 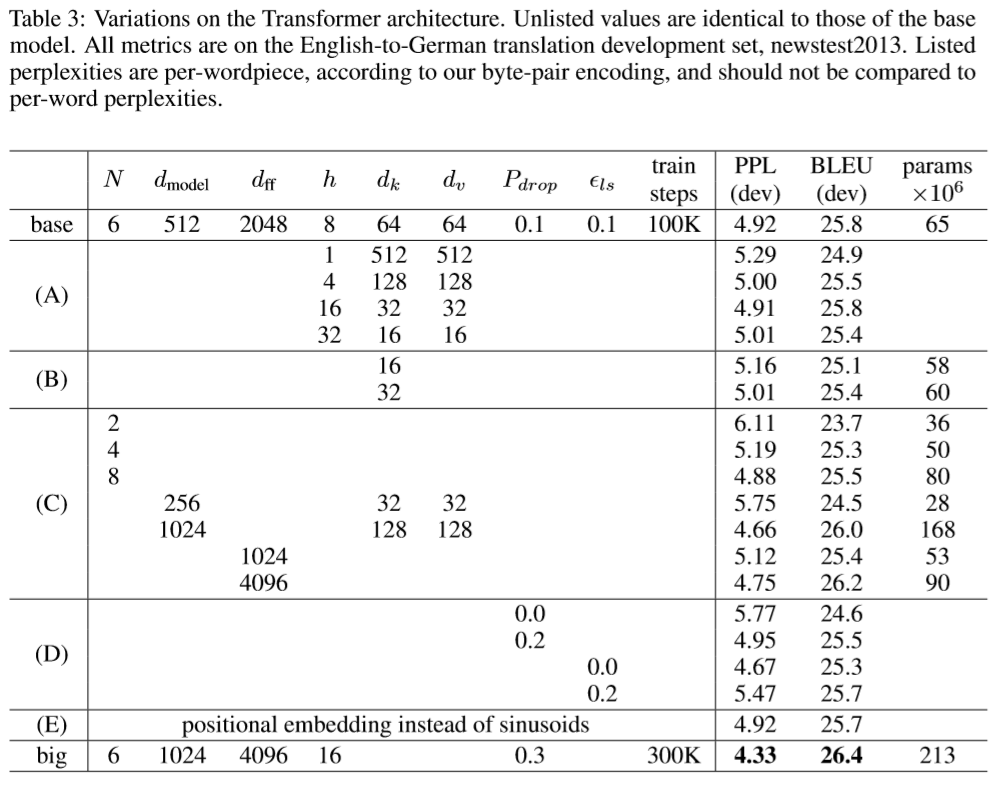 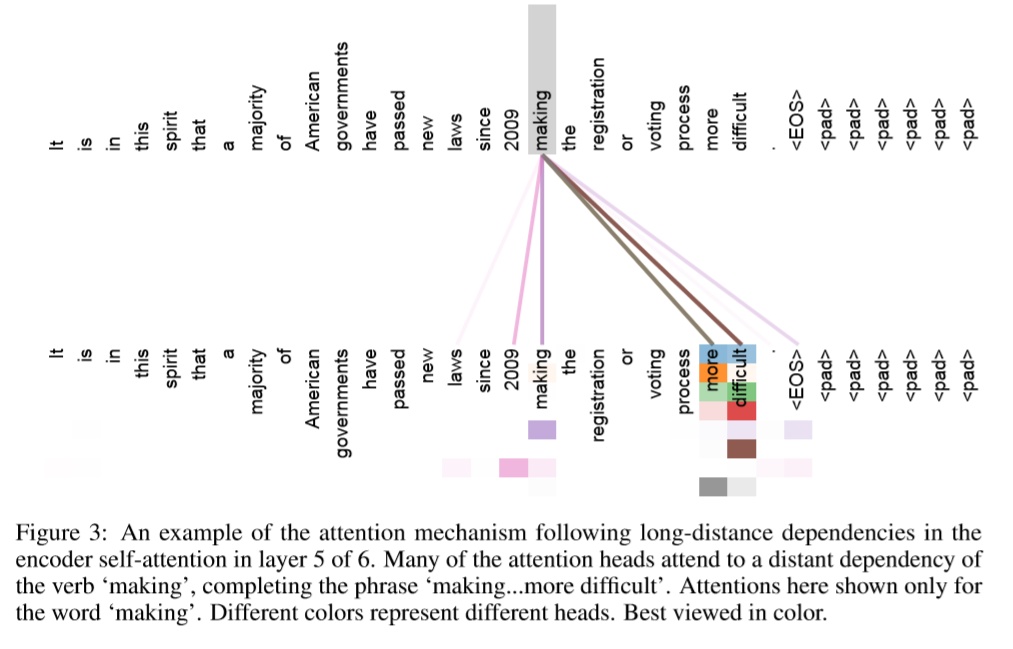 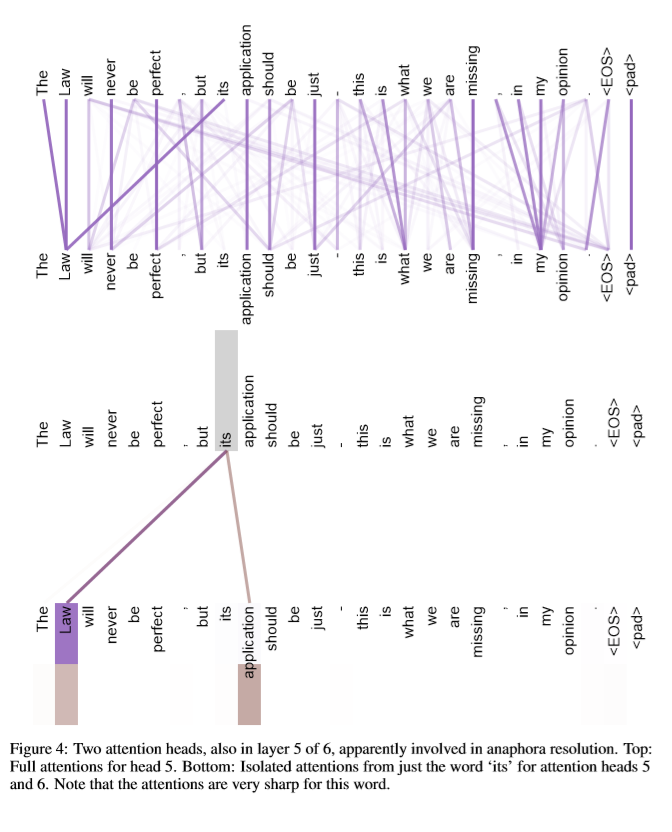 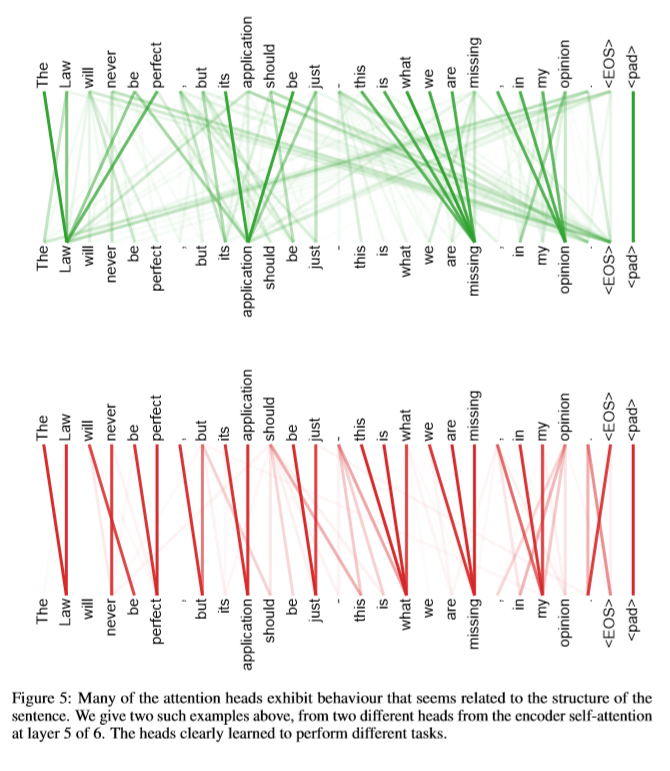