Deep networks naturally integrate low/mid/high-level features and classifiers in an end-to-end multi-layer fashion, and the “levels” of features can be enriched by the number of stacked layers.

But as networks get deeper, vanishing/exploding gradients problems appear. They hamper convergence. To solve these problems, normalized initialization and intermediate normalization layers were introduced.

Nevertheless, adding more layers to a stuiably deep models leads to higher ‘training error’ This problem is called ‘degradation’. Note that ‘training error’ degrades so it is not caused by overfitting. 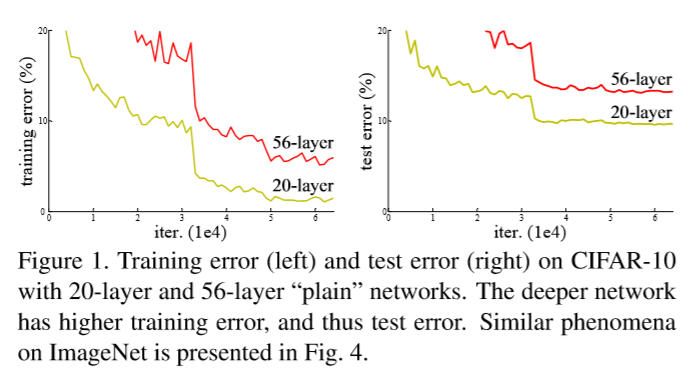 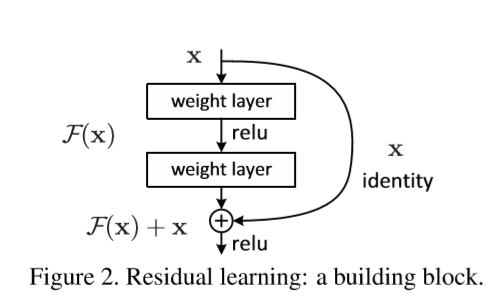 The dimensions of $x$ and $F$ must be equal. If this is not the case(e.g. when changing the input/output channels), we have two ways.

For every two or three layers, shortcut connections are added. If the dimensions match, identity shortcuts are directly used. If dimensions don’t match, the authors inserted zero entries (case A) or 1x1 convolutions (case B). 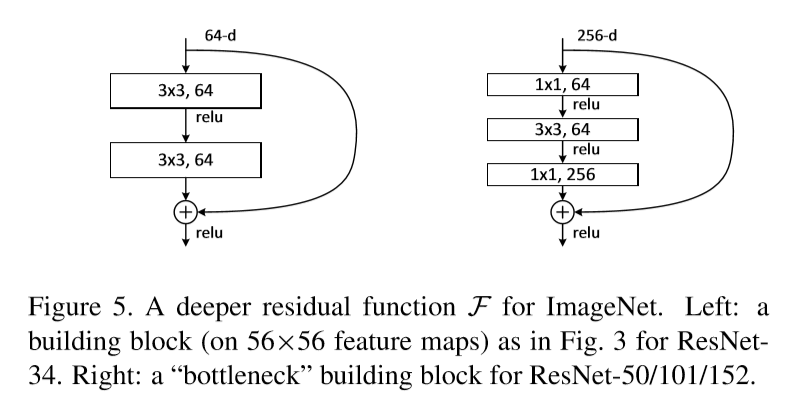 For deeper nets, long training time is concerned. To save time, ‘bottleneck’ layer is introduced.

For each residual function F, stack of 3 layers instead of 2 is used. The three layers are 1x1, 3x3, and 1x1 convolutions, where the 1x1 layers are responsible for reducing and then increasing(restoring) dimensions, leaving the 3x3 layera bottlenceck with smaller input/output dimensions. 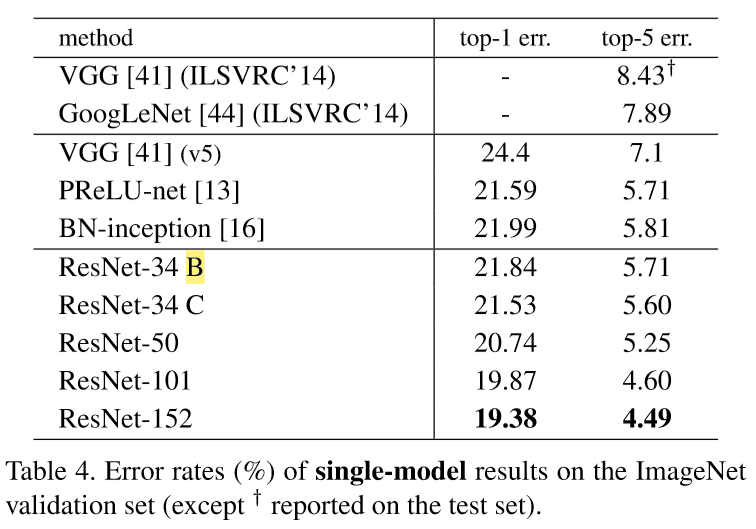 The authors say that this optimization difficulty is ‘unlikely’ to be caused by vanishing gradients, because they used BN(Batch Normalization) and also verified that the backward propagated gradients exhibit healthy norms so that neither forward nor backward signals vanish.

They conjecture that the deep plain nets may have exponentially low convergence rates, which impact the reducing of the training error.

34-layer ResNet exhibits considerably lower training error and is generalizble to the validation data. This indicates that the degradation problem is well addressed in this setting and it managed to obtain accuracy gains from increased depth.

For identity vs projection shortcuts, they’ve experimented three cases. (A) zero-padding for increasing dimensions(all shortcuts are parameter-free) (B) projection shortcuts for increasing dimensions (C) all shortcuts are projections. B is slightly better than A because zero-padding dimensions in A couldn’t merit from residual learning. C is marginally better than B, but the authors attributed this to the extra parameters introduced, and not to the residual learning. So the authors continued with options A or B. 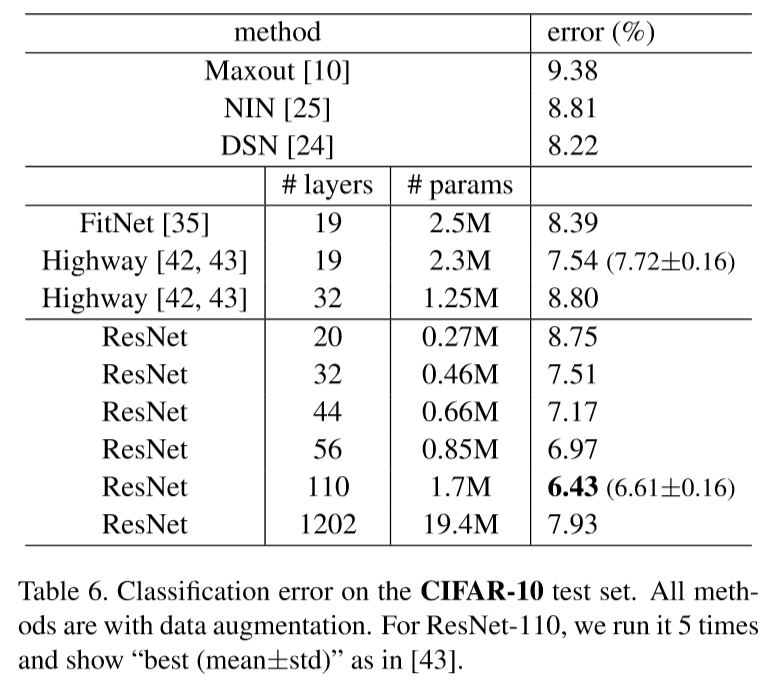 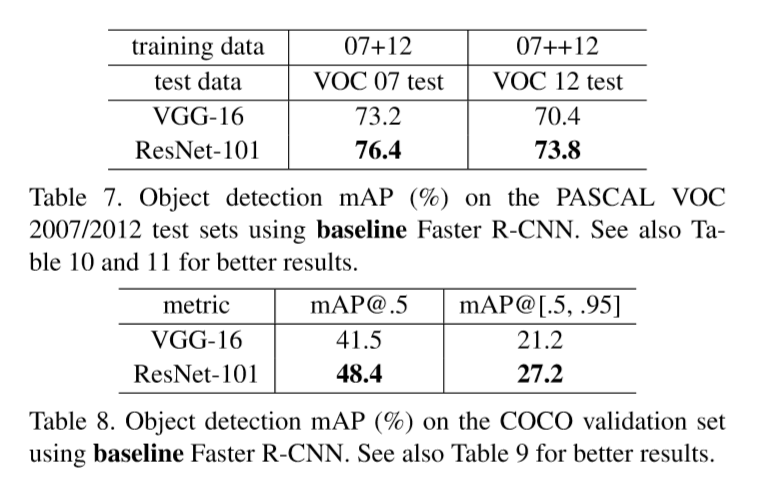 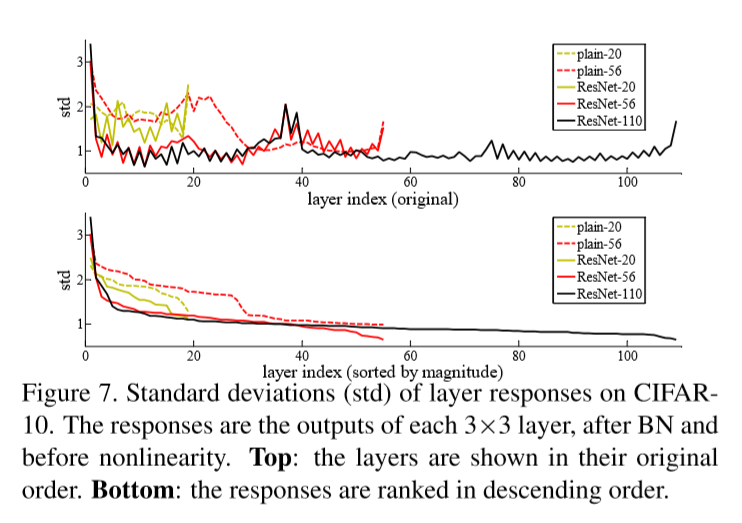 Also, deeper ResNet has smaller magnitudes of responses, because when there are more layers, an individual layer of ResNets tends to modify the signal less.