What are deep ConvNets Learning?

By finding the image patch that maximizes activation unit of layers, we can visualize what convnets are learning in each layer.

What is Neural Style Transfer? 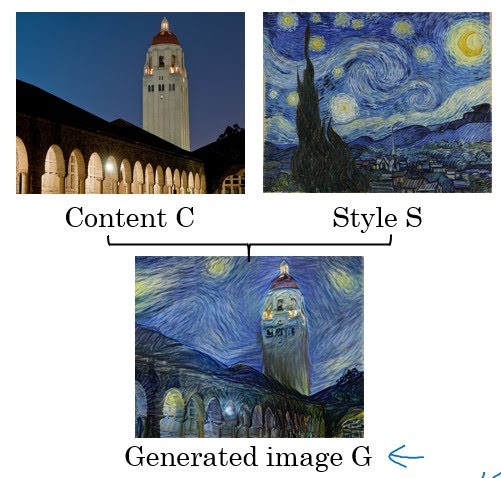 $J_{content}(C,G), J_{style}(S,G)$ computes how similar generated image is to content and style, respectively.

Say you use $l$th hidden layer to compute cost function. This $l$ should not be picked from too shallow layers or too deep layers. If you use hidden layer one, then it will really force your generated image to have pixel values very similar to your content image. Whereas, if you use a very deep layer, then it’s just asking, “Well, if there is a dog in your content image, then make sure there is a dog somewhere in your generated image.”

If this value is small, it means that C and G are similar with respect to their activations in layer $l$. We want them to be similar, so this is a good cost function that we want to minimize.

We will define style as correlation between activations across channels. So if $k$ th and $k’$ th channel of layer l is highly correlated, $G_{kk’}^{[l]}$ is big.

We want the style matrix of S and G to be similar. Thus our cost function of layer $l$ would be as follows;

Cost function across all layers would be the weighted sum of costs of layers.

large $\lambda^{[l]}$ means that we want to make gram matrix of style image and generated image similar with respect to layer $l$ more.

Now that you know how to comput cost function, neural style transfer algorithm is simple.